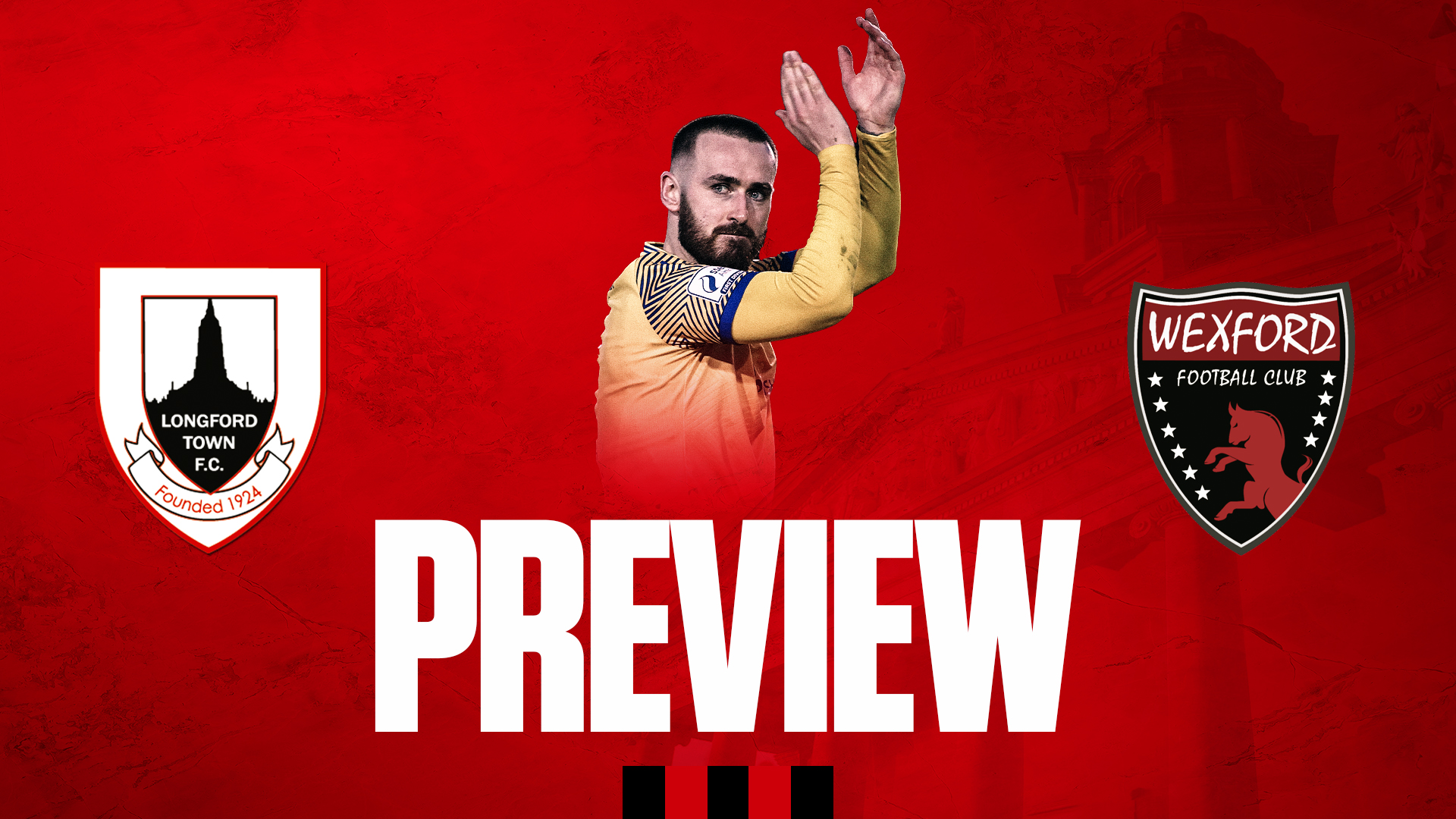 Longford Town can take a huge step towards securing a play-off place by collecting a fourth consecutive league win at home to Wexford FC on Saturday night. Gary Cronin’s side have responded well to the shock home defeat against Athlone Town last month with wins against Waterford, Cobh Ramblers and Bray Wanderers and now find themselves ten points clear of tonight’s opponents who were previously breathing down De Town’s necks.

Such a winning streak was desperately needed from a Longford perspective as well with De Town’s two main rivals for a play-off place, Treaty United and Wexford FC, both putting together fantastic sequences of form since returning from the mid-season break.

Ian Ryan’s Wexford have suffered just one defeat in nine league matches since the resumption with that loss coming against league leaders Cork City. An FAI Cup giant killing away to Sligo further advertises the job Ian Ryan is doing in the South-East.

This has been an unpredictable fixture so far this season with Longford cruising to a 3-0 win in Wexford early on this season before a late goal from Sam Verdon saw Town steal three points here at Bishopsgate in the next meeting. Since then, Wexford gained revenge with a late winner of their own back at Ferrycarrig Park and there is likely to be little between the two sides again this evening.

With Longford starting to ride away into the sunset and Treaty United opening up a four point gap over Wexford, Ian Ryan’s men know they can not afford to be cut adrift in the race for the play-offs with the fixtures beginning to run out. With Wexford away to Treaty in Limerick on the final day of the regular season, Ryan will want to ensure his team have something to play for when that game comes around so staying in reaching distance of the top five is paramount.

Jordan Adeyemo has proved to be an instant hit since arriving at Bishopsgate from Galway United with the frontman bagging four goals in just six appearances, including a superb brace in the 3-0 victory away to Bray last time out. With only the bottom three sides holding a weaker defensive record than Wexford this season, Adeyemo appeals as a player who could do some damage to their promotion hopes on Saturday night.

A clean sheet in Bray will have pleased Longford boss Gary Cronin as much as anything but his defenders will have to remain sharp with the likes of Aaron Dobbs, Dinny Corcoran, Conor Barry, Conor Davis, Jack Doherty and Harry Groome all chipping in with plenty of goals this season. With so many exciting forward players at both ends of the pitch, spectators should be treated to an exciting end to end contest.

Saturday’s game also marks a meeting of two clubs who have excelled with their streaming productions this season on LOI TV and the volunteers behind the scenes who allow supporters to view games from all over the globe in such a professional and high-quality manner deserve huge credit. While the coaches and players involved in these clubs are battling for superiority on the field, the brain trusts that put all the pieces in place for these streams are always competing in a very friendly manner to try and outdo one another and find ways to further enhance their online offerings and this can only be a good thing for the league and its supporters. When you see far greater resourced clubs with much bigger populations than Longford and Wexford offering streaming services that are massively inferior in quality it really should put into perspective the work these volunteers put in.

Back to on-field matters, with a tough trip away to title chasing Cork City coming up after the FAI Cup weekend, which sadly Longford are not involved in, this home game is a great opportunity for Longford to keep their recent good form alive and all but seal a play-off place.